Which of the two Tiptonic Finger Pick Adhesives is the best? The answer is quite simply the one that works best for you. How aggressively you play your instrument, the anatomy of your fingernail and how tightly the Tiptonic Finger Pick wraps around your nail are just a few of the factors that come into play. After testing hundreds of adhesives, from the acrylic adhesives used in cosmetic nails, super glue used with ping pong balls, Craft Glue Dots used with other guitar nail products, and hundreds more, we ended up finding one that is almost as good as our Premium Activator Adhesive, and that says a lot! Check out the following Tiptonic Adhesive Comparison to see which best suits your needs.

Read the Tiptonic Adhesive comparison below to decide which of our Finger Pick Adhesives will work best for your needs.

Our Premium Activator Adhesive is a real workhorse. It has the most solid feel of the two adhesives. By warming the adhesive in the Activator for 3 minutes before you put them on, the glue softens and squeezes into any gaps between the pick and the inside of your nail. This gives you a much tighter fit on the nail than a room temperature adhesive. It allows the glue to squeeze out of the way on the points of contact between your fingernail and the inside of the Finger Pick, and flow into the gaps. This increases the surface contact area increasing the strength of the bond. This Pressure Sensitive Adhesive removes cleanly off of the nail when you remove the Finger Pick. It remains on the pick and  is reusable for around 6 weeks of daily use.

Premium Activator Adhesive is safe to use and approved for indirect food contact. 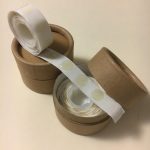 Press and Play Finger Pick Adhesive is an incredibly strong pressure sensitive adhesive that is able to form a strong bond instantly at room temperature. To do this the adhesive is a bit softer and more flexible than the Premium Activator Adhesive. This allows it to quickly adhere to your nail with a firm press. Place 1 or 2 adhesive strips on the fingernail as needed to secure the Finger Pick to the nail.

Safe to use and approved for indirect food contact. 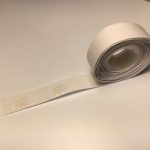